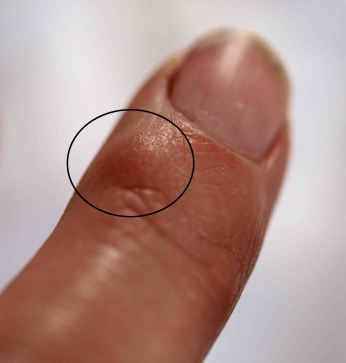 The picture above of the middle finger is not me flipping you off. It’s not even my finger. I found it on this blog. I am featuring it here because it shows a writer’s bump, which is something I, and many other writers have.

I once asked a manicurist if she could ever tell what profession a person has from looking at their hands. She had never considered it. Then I told her about how to spot a writer from their bump. I’m sure she was edified forever by this information and it changed how she approached her job.

I realized the other day that my writer’s bump is much smaller than it used to be, presumably because I hardly ever use a pen anymore, opting instead for a computer keyboard. This caused me some dismay since I rather like my writer’s bump and the distinction it gives my profession.

Then, I realized in horror that most young people probably don’t have a writer’s bump. They might not even know what one is since they all use phone and computer keyboards.

Truly, writers’ bumps are endangered. We just can’t stand by and let them disappear. They have been with society for hundreds of years. Somebody should do something about this. We need a public information campaign to “Save the Writers’ Bumps!”

Where is the outrage? Why are we complacent with the disappearance of this badge of honor earned by hours of slaving over paper with a writing utensil?

Cast aside your computer keyboards and your phones my friends. Start a movement!

(Smirk. I think not. I actually love the convenience and speed of typing.)

In her day job, Marie Zhuikov is an award-winning science writer and communications project manager, specializing in environmental and medical topics. She has published hundreds of articles, publications, videos and radio programs, as well as coordinated production of many web sites. At night, Marie writes eco-mystic romance novels for new adults. Her first, Eye of the Wolf, was published in 2011. The sequel, Plover Landing, was published in 2014. Her first short story, “Water Witch,” was published in the Going Coastal anthology in 2017. Her website is http://www.mariezwrites.com and she blogs at http://mariezhuikov.wordpress.com.

3 thoughts on “Writers’ Bumps: An Endangered Condition? by Marie Zhuikov”